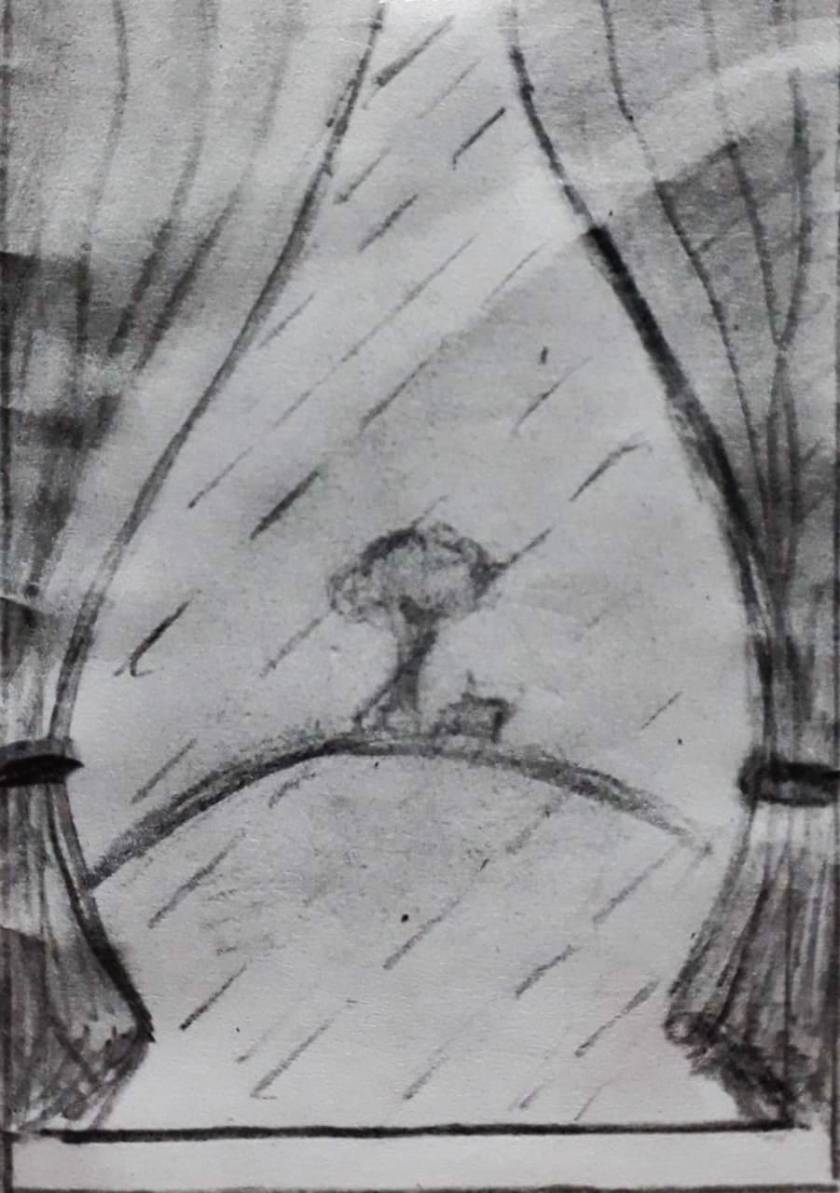 In case you missed Ep 3: Caught in the Cataclysm, Click here and Catch up. Also, this is the Last Episode of Rainy Days in Cloudless Minds, Enjoy the Christmas Finale

My troubles started soon after. Most of the moments after her funeral were a blur of emotions and things that probably didn’t happen. Yet I can clearly remember the fall, the underside of the bridge moving further away from me, the flowing water moving closer, open arms ready to receive me, embrace me, wash away my pain, my torture. I fell, slow, serene, not a care in the world of what awaited me at the bottom, I was reminded of the gulls gliding in the sky, their serenity, the salty breeze, the blue skies, her black enchanting eyes, her smile, her.

I remember being hauled out, I remember the hospital ward, I remember my friends and family, they came, they went, nobody stayed, nobody could ease my pain. In the end, I was in a room ﬁlled with people who cared about me, and yet I felt so alone. There were many people who cared, but not a single person that understood. There was no Anjali. Next thing I remember, I’m in the ward of a mental institution, the guy that went crazy after his wife died. They pitied me, felt sorry for me, but denied me escape. I hated every second. I just wanted to get back to her, I wanted to go home, my home with a heart, and each second they kept me restrained was one more second to wait before I could see her.

“Is she here? Did Anjali come?” I asked the nurse and like the last hundred billion times, I got the same answer. Everyday I would sit wondering why all our plans of spending Christmases, Easters, independence days, any celebrations together had all come to a halt. Did she no longer care? Did she not want to see me again? What did I do? What have I done wrong? Where are you?! Why have you abandoned me to suffer like this? If I did something wrong, I’m sorry! Don’t leave me here like this! Please!

Christmas slowly crept into the wards of the institution. The festivities meant my family would visit me. Or so I’m told, but I don’t recount any visits from a loving family but the staff claims I was visited almost every few months. Of course sometimes I ﬁnd it hard to tell the difference between family and strangers. But that’s not what bothered me. All around me, I see happy faces, I see wives with teary eyes, the scenes of a patient wait coming to a happy end, I see sons and daughters visiting their fathers and mothers who barely cared. But the one face I waited for everyday never came. I looked behind the Christmas trees decorated with bright lights and colorful decorations, much like the world me and Anjali created in our minds, unbound by limits, empowered by imagination, I searched between the stacks of presents, like when she used to play hide and seek, always the fun little girl no matter how many Christmases passed, I looked out the window at the stars much like the stars we admired, while simply stargazing on the roof of our house, holding hands, merging minds. She was nowhere to be found. I didn’t look forward to the presents, nor did I admire the decorations. I simply sat and waited, holding back tears, taking deep breaths and assuring myself, tomorrow, tomorrow she would come. She has to. Right?

I would write letters daily, letters to her telling her about my day and begging her to come back. She never replied. I drew pictures for her, like I used to at home. I still remember how we painted the walls together. The walls of our home were canvases for our minds. Yet she never came to compliment them nor say they were mediocre and that she can do better. She always loved doing that. It never failed to be amused. Yet, now, she’s not here, all her promises were simply hollow. She promised to live with me forever, but now she left me to suffer. I couldn’t even let her know that Puppy, our golden retriever(She actually named him that), was dead. The doctors had left him in the custody of a nearby animal shelter. He got the best care and I visited him often. The only part of home I still had, the only thing left that still made me feel like I wasn’t completely alone. Now he’s also gone. The staff joined me in a special funeral for him. I still have his collar which Anjali crafted. I have so much and yet nothing. I just wanted to die, that sweet escape of blackness, the calm and quiet transition. It also meant that I could see her again.

“Wake up, honey. What’s wrong? Had a bad dream?” Her sparkling eyes loomed a few inches from mine. I sat up on the bed and looked around, we were in our room, Puppy sleeping on the beanbag under the window sill. I felt a huge sigh of relief as I released it had all been a bad dream.

I got up from bed and walked towards the window and stared out at the hill in the distance, the very same hill where we used to sit as kids on a bench under a tree. There was a slightly drizzle that morning, the pitter patter of raindrops on the glass giving the room a serene ambiance. I felt her arms surround me as she hugged me from behind, we stood there listening to the music of the rain, I felt her breath on the back of my neck, I heard the birds chirping outside and the sun slowly rising. Only there was something odd I noticed as she hugged me.

“Anjali, how did that ring get there?” I didn’t remember proposing to her other than in the dream but there it was, the very same ring I bought, sitting on her ﬁnger. “Ha ha. Very funny. You obviously don’t remember us going to Cannes, you obviously don’t remember taking me to Long beach and then to Paris and proposing on top of the Eiffel tower.” she replied, sarcasm showing clearly in her voice. “But that’s absurd. Why would I ever do that?! You’re terriﬁed of heights!” It wasn’t long before the medications wore off and I
returned to the hospital ward where she didn’t exist, where she was still dead. The reality I was in, was far away from the reality I wanted to be in. I found it harder and harder to differentiate between what’s real, and what’s the effect of my medication

Soon, I learned to cope as I accepted that she was not alive in this reality, but in my reality she always would be and that’s all that mattered.

“What? Never seen a human before?” She asked me, “You didn’t listen to a word I said, did you?” “Yeah yeah, I was listening, so the cottage in Italy, and the grapevines and the… Yeah I wasn’t listening.” I ended with an awkward smile as I sat up straight on the bench. I had lost myself in her eyes as I rested my head on her lap, her ﬁngers stroking my hair. We simply laughed about it together and towards the end, we sat there, huddled together, much like on the couch the day I told her about her condition, the day I asked her to marry me, the day I had hidden a golden retriever puppy in the bedroom which pounced on her as soon as she entered.

Every day we would simply sit on that bench, Puppy, running around playing in the puddles of water, me holding her hand, her ﬁngers intertwined in mine, the orange evening sun giving her skin a beautiful orange glow and I was lost in the abyss within those eyes and yet, despite all my attempts I could never recreate her
in my mind, with all her perfect imperfections, her tiny actions, her smile, her eyes, everything simply a crude recreation of blurry memories from a damaged brain. A brain clear of all thought and feelings, but a brain exploding with emotion and images, painful memories, blissful flashbacks, walks down nostalgic paths, holding hands with the past, ignoring the present to an indeterminate future.

There were clear skies, there was rain, there were hailstorms, there were cyclones, tornadoes, droughts, floods, tsunamis, snowfall, there were seasons of blistering cold winters of depression with beautiful snowflakes of flashbacks, there were burning hot summers of heartbreak with brights golden rays of hope, there were uncomfortably humid springs of regret which ﬁlled the valleys of my cracked heart with flowers of kisses and hugs from a time past, there were death ﬁlled autumn, where splinters of my heart withered away along with leaves of the painful past, paving way for a brighter future

There were rainy days in cloudless minds, after all.

……………………………………………………………………………………………………………………………………………………
Special note: The above events were the mutterings of a psychologically unstable patient that were noted down by a passionate psychiatrist who claimed to have known the patient since childhood and even loved him at one point, unrequited and unacknowledged. Of course the reliability of these writings is questionable as they could quite simply be the rantings of a madman accused of murdering his wife, of course, it was never proved, or as the story suggests, the sufferings of a passionate lover that lost his loved one. Either way it is your decision, dear reader, as to what you believe. The sketches found attached to the writing were in fact made by the patient himself, the ﬁrst sketch being the sketch of the girl, Anjali, herself, all made before he descended into madness.
Of course, as a psychiatrist, I didn’t fail to notice that the only clear sketch was the sketch of Anjali, which shows how clearly the patient remembers the face, which leads me to question if there is actually some truth behind these writings. But, that is just my deduction. Merry Christmas.
Dr Rajesh Kumar. 25th December 2016

Thanks to all the readers for being part of this journey and making this Christmas special happen. This series wouldnt be real without the constant love and support we get fro you all. Taking a moment to thank our writer Arvind for lending his talents in fulfilling the Christmas miracle and deserves all the applause in the big stage .I would like to thank the people behind the stage that helped us promote and engage with series, bring in content and pictures, helping us build the foundation and complete this Christmas with a whole heart. once again, Merry Christmas.